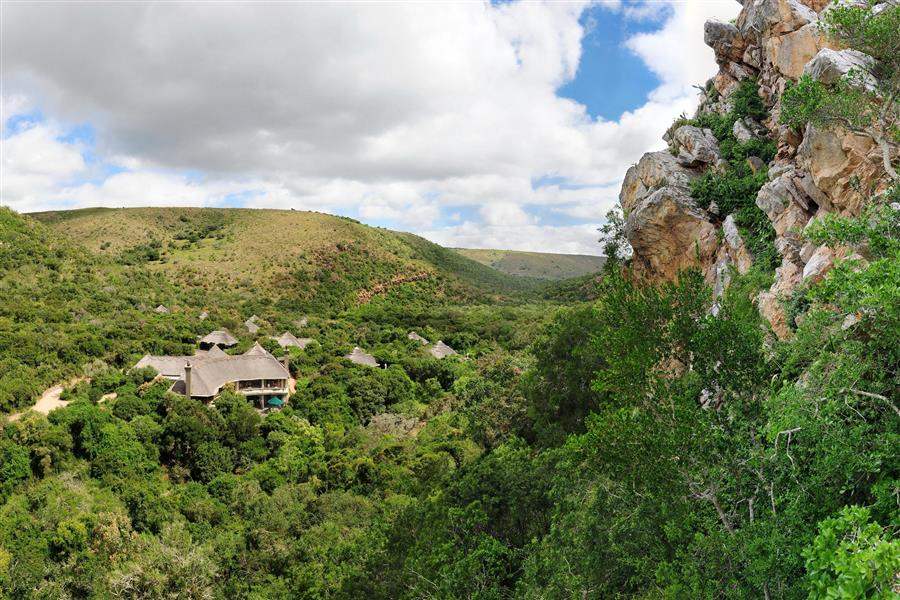 A fantastic family safari destination in a private Big 5 reserve, home to the largest concentration of wildlife in the Eastern and Southern Cape.

Private and tranquil Eagles Crag Lodge is an avante-guard masterpiece of thatch, stone and glass. This luxury lodge is nestled in a valley and offers 9 superior rooms set far apart enough for privacy...

Each suite offers a breath taking experience in luxury.  The suites are all beautifully decorated with light colours and touches of African décor.  A four poster bed stands looking out of the wall to ceiling glass sliding doors that open out onto your private deck.  Your private pool is perfectly situated on the edge of the deck giving you undisturbed views of the spectacular reserve and rocky walls where eagles sour above.

The Shamwari Game Reserve boasts 25,000 hectares (61,000 acres) of malaria free, private game reserve situated in the Eastern Cape of SouthAfrica. Situated along the Bushmans River, halfway between Port Elizabeth (45 minutes drive outside the city) and Grahamstown, a pleasant drive from Cape Town, it forms a natural extension to the famous Garden Route. Steeped in Settler history, and dating back to the time when a multitude of game roamed wild and free, the 20,000 hectare reserve boasts five eco-systems, thus enabling the support of many forms of plant, animal and bird life. The Shamwari Game Reserve has received numerous international awards, including the World s Leading Conservation Company and Game Reserve for five consecutive years. Accommodation comprises of 6 Lodges dotted across the reserve.

Game drives:
Game viewing is carried out morning and evening on game drives, when you are driven in your open vehicle (which seats up to 6)over the rolling hills and valleys. If you have a particular species you would like to see, please mention it to your ranger; he will be happy to merge your plans into the group. In the early morning (if you are keen) you will leave before dawn, spending up to 3-4 hours spotting before returning to your lodge for a hearty breakfast. Blankets are supplied for those cold morning starts!